Home Blog Why we don’t have to age: A short discussion of David Sinclair’s anti-aging level 1 and 2

Michael Pietroforte July 2, 2020August 31, 2020 longevity, supplements 0
In my last post, I outlined David Sinclair's information theory of aging which claims to explain why we age. Today, I will summarize why Sinclair thinks that we don't have to accept this unfortunate fate. Essentially, Sinclair claims that we can intervene in the aging process at three different levels: Lifestyle, supplements, and Yamanaka factors. In this post I will discuss levels 1 and 2.

At the core of Sinclair’s theory of aging is the idea that moderate physiological stress activates the so-called longevity genes (sirtuins, mTOR, and AMPK) because cells focus on repairing DNA damage during or after these stressful periods. Bearing this in mind, it follows that a lifestyle that promotes the right kind and the right level of physiological stress would help to slow down the aging process.

Sinclair’s physiological guidelines for combatting aging involve three simple steps: exercise, calorie restriction, and exposure to the cold. You’ve probably already heard of two of the three, whereas the third one is rarely mentioned in anti-aging resources.

The idea that exercising and calorie restriction are helpful in slowing the clock of aging is, of course, nothing new. What Sinclair adds is essentially an explanation of why those stressors slow down aging. He does this by linking his information theory of aging to the observation that those who exercise and maintain a low-calorie diet live longer.

You might say that exposure to low temperatures also makes a lot of sense. After all, both vegetables and dead animals last a bit longer if you put them in the fridge. But before you rush now to turn on your aircon to stay fresh and young, read on first. 😉 The main idea here is to expose yourself to less-than-comfortable temperatures for a certain amount of time every day.

This is comparable to exercise, during which you stress your body for a certain time. By the way, this also applies to the calorie restrictions that Sinclair has in mind. He doesn’t suggest to just eat less. He wants you to feel a little hungry for a certain time each day. Feeling hungry, cold, and tired from exercise are signals to your body that you need to hunker down so that the damage repair can take place.

Sinclair offers more explanation and empirical evidence in the book, but I will not go into as much depth as he does here because I am more interested in the next level.

In Sinclair’s view, some supplements have a similar effect on aging as the level 1 countermeasures – that is, they activate the longevity genes. You might think, great! Just pop some pills and there is no need to slave away in the gym and no shivering in a cold water tub. Parts of Sinclair’s book does seem to suggest this, but I somehow doubt that he would really go that far. At a minimum, I would think that Sinclair counts on levels 1 and 2 for his daily fight against aging.

It is important to note that Sinclair doesn’t actually recommend any supplements. He just describes what kinds of supplements he takes (p.303) and then explains why he does it. Likewise, I will not give you a list of supplements that you need to purchase. In fact, I won’t even list Sinclair’s supplements (except one to make a case).

At this point in anti-aging books and articles, the author usually tries to escape from liability by urging you to consult your doctor before you follow any of the recommendations. Try that! Most family doctors will either frown or smile and then tell you that you don’t need any of that. Exercise and a healthy diet is all you really need, and aging is just the most normal thing on earth and can’t be stopped anyway.

For sure, Sinclair would strongly disagree here. I’d say it’s up to you whether you choose to believe your family doctor or a Harvard professor who has dedicated his life to finding a cure against aging. You don’t have to jump to the conclusion that this is a no brainer because Harvard is Harvard and a family doctor is just a family doctor; instead, I advise you to carefully examine the evidence that Sinclair presents for his supplements.

To be honest, I found this part often a bit disturbing to say the least. It is not that he doesn’t also offer some good scientific evidence. In fact, most of the supplements are quite common and have been discussed many times in similar books by other scientists. The problematic parts are the ones where Sinclair clearly departs from the fundamental rules of science.

The most obvious case is the chapter where he tells the (lengthy) story of his father who appeared to suffer from the signs of aging and miraculously recovered his youth after taking one of Sinclair’s favorite supplements (p. 140ff). I am not questioning that this supplement really had a positive effect on Sinclair’s father. However, what a scientist must never ever do is cite a single case as evidence (at least in the bio sciences). I’d say this is the second worst crime a scientist can commit (after faking empirical evidence).

I suppose the corona pandemic has helped many understand why finding working drugs is painfully time consuming. You need a very large number of cases to draw any kind of scientific conclusion. And of equal importance, you need a control group to rule out placebo effects.

Which reminds me of an interview of Julia Chatterley, the host of a CNN business show, where her guest complained about doctors who tried different drugs against the virus and whenever a patient got better afterwards they presumed that the drug must have worked. The guest then somehow brought cookies into the discussion and Chatterley cutely concluded that cookies might work against the virus because she always feels better after eating one. (Disclaimer: Cookies don’t cure Corona!)

Unfortunately, placebo is the best friend of all supplement makers. Just read the comments on Amazon on supplements that Sinclair discusses in his books:

“Five stars: I took this for a week after reading Sinclair’s book and I already feel the effects. I feel just great!!!! I am getting younger every day, just like Sinclair’s father!”

Okay, I made this comment up. But you will find many comments in that tone (see below). By the way, “placebo” is Latin and means “I shall be pleasing.” Wishful thinking is another great enemy of good science. A lot of this emerges from between the lines in Sinclair’s book, and you will find the same in many of his interviews on YouTube. 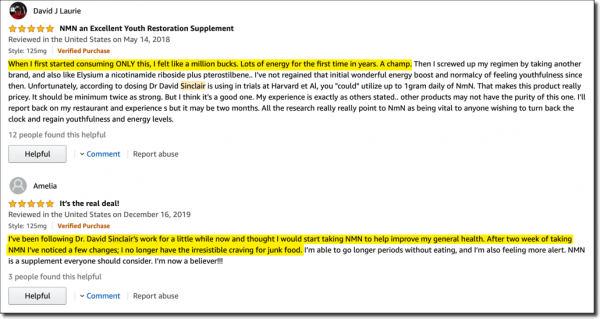 The second problem with Sinclair’s supplements is that you will have to invest quite some money if you want to work with the dosages that he takes. Depending on where you live, you might have to spend a few hundred dollars per month.

Perhaps, you say, it is worth it if it really makes me younger or at least slows down aging. If we assume that you find the scientific evidence (which does exist) sound, you still face another major problem.

You’ll notice that on Amazon the prices are quite different. Sometimes you will find products that are 200 – 300% cheaper for the same amount of active agent. How can that be? Again, read the comments and you will get an idea. You’ll often find several claims that the product is fake. Will Amazon remove such products or even investigate? They won’t!

For fun, I ordered three different products of one of Sinclair’s favorite supplements (NMN), which differed quite a bit in price. All three came in professional looking boxes, and the substances all looked similar (white powder). However, the taste was very different. NMN is supposed to have a sharp taste. I could only verify this for one product (which wasn’t the most expensive one). One had no taste at all, and the taste of the third one didn’t quite match with the descriptions you find online.

So what can you do? Just go for the most expensive ones? I guess not. Maybe you rely on products that have been listed for a while and have many positive comments. But does this really ensure that the product is not fake? I doubt that.

The only secure option you have is to send a sample of the product to a lab. And you have to do this on a regular basis, because just one positive test result does not mean that the vendor won’t decide at a later time to make some extra cash and perhaps occasionally reduce the agent concentration.

What’s your take on this? Are you taking anti-aging supplements? Will you replace the sauna in your house with a cozy family cold room?

In my next post, I will discuss Sinclair’s anti-aging level 3, which is certainly the most interesting and promising approach for a cure against aging.