All in all, I liked most of the stories. I think I rated the book with four stars. Actually, it deserves only three stars—at best. However, because everything about longevity fascinates me, every book I read on the topic automatically gets an extra star. 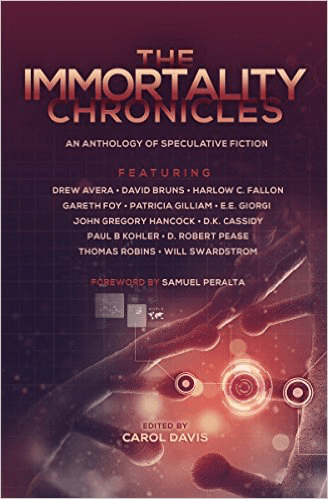 The first story touches on an interesting problem facing an immortal who lives among mortals. If the people around you only have a normal lifespan, would you let them know that you’re immortal? I guess not. Most people don’t like other people who are somewhat different and being immortal is very much somewhat different.

Obviously, an immortal has many advantages beyond just living a long, perhaps infinite, life. For instance, it should be relatively easy to accumulate wealth over time. This reminds me of the novel, One Trillion Dollars, I read a long time ago. If you invest only a very small amount of money and wait long enough, compound interest will make you the richest person on earth. Obviously, an immortal could wait long enough.

Such advantages would certainly raise suspicion and envy. The question is, how can you hide that you’re not aging? Gregory Hancock found an unexpected solution.

After I read the story I began to wonder if some people, perhaps scientists working on life extension, already made more progress that I admit publicly. If you could reverse aging, would you share this breakthrough with the rest of the world even if it meant unforeseeable consequences for the planet?

Rememorations, by Paul B. Kohler

Rememorations, by Paul B. Kohler, covers another problem an immortal might face:

There is a theoretical maximum boundary of knowledge that can exist in a confinement the size of a human skull. A normal lifespan would never trip this boundary. But an immortal life would have to, at some point.

Of course, the problem is that the brain is not a computer, even though many cognitive scientists still believe this theory. There are no files in the brain, and if you try to delete information (say, for instance, everything that is related to a certain person), you will inadvertently also delete other information. The consequences might be surprising.

I somehow doubt it is possible to erase all information about a certain person in the human brain. The brain stores information in a very fussy and distributed fashion. Even information that was not associated with a person originally would mix in over the years.

I also doubt that the problem exists. Unlike computers, brains are extremely good at forgetting. Your brain removes information you no longer need automatically, gradually and over time. Thus, we would never reach a maximum boundary, although the theoretical storage capacity is limited.

And if we want to extend this capacity, well, then we simply have to extend the “confinement of the human skull” with a few additional neurons.

The Scout, by Robert D. Pease

The Scout integrates two well-known science fiction topics – mind uploading and alien invasion. As in most alien invasion stories, we learn that the human race, although hopelessly technologically inferior, it still very special and certainly worth saving.

I don’t like this kind of story, because at its core it is chauvinistic. The belief (and hope) that the nationality, race, or species you accidentally belong to must be special is repulsive to me.

When it comes to the comparison with a species that is technologically so advanced that it can visit our world, this view is also hopelessly naïve. From our point of view, we might be worth saving, but for an alien species, we are most likely nothing more than ants. If it is a nice alien species, it would avoid stomping on us.

I also didn’t find anything new in the mind uploading part of the story. All in all, I think it is one of weakest stories in the book.

The Essence of Jamie’s Father, by Gareth Foy

The next story is much more to my liking. Most stories about immortality imagine the life of a human being who survives over the centuries in a changing human world. Eventually, he or she becomes somewhat bored and wishes nothing more than to die. However, such an existence is not immortality. The hundred thousand years or so that human beings have existed on this planet are not even noteworthy, if we compare it to the age of the universe of about 13.82 billion years.

However, Gareth Foy, the story’s author, thinks that when it comes to real immortality, even the age of the universe is relatively short. He uses the word “immortal” literally:

The universe will start over, but we will still exist, and we will remember everything. We can change the universe. We have all the time we need to figure out why this all happens and take control. We can learn how to stop the universe from resetting if we want. Who knows what else we can discover? The universe will reset whether you stop the process or not. You will be born again in a trillion years.

I love this kind of science fiction, because it tries to picture worlds that are far beyond our limited human understanding.

The Backup, by Patricia Gilliam

With Patricia Gilliam’s tale, we are back in the relatively simple world of humans. Her topic is human cloning as a means of gaining immortality, or perhaps we’d better call it longevity. It’s an interesting topic and one that is the focus of many writers’ work.

The interesting part of this topic is the confusion that jumping from cloned body to cloned body might cause. It is interesting, because the memory is transferred to a new physical substrate and the person’s looks don’t change, making it hard for the people around this person to notice the change.

Some of us might find it difficult to attribute personal identity to a mind that has been uploaded to a computer. Transferring your mind into another human body that is genetically identical would be easier to accept.

However, in reality, such a scenario is not very likely. More likely is that we would just replace malfunctioning organs with cloned organs that have our own DNA. Once you replace every organ, you would be alive in a new body.

The problem is, of course, the brain. But because neurons don’t age (only the glial cells in the brain age), we could solve this problem. And then there would still the option to replace neuron by neuron, so you can keep your personal identity.

Yet another option would be to replace parts of your body with machine parts and become a cyborg. David Bruns examines this question: At what point you stop being human? No longer being human seems to worry many humans, probably because they fear becoming an outcast, no longer belonging to the human community.

And if you are no longer human, there might be legal consequences, which is David Bruns’ main topic. In the case of the story’s protagonist, 17.5 percent organic tissue remains:

Raser licked his lips. “So, according to your testimony, Mr. Stemm, you are 82.5 percent artificial‌—‌”

“And I prefer to ask the questions,” Raser shot back. “You are 82.5 percent bionic today. Is there any reason why you couldn’t be 100 percent bionic?”

“Really? Is there a point where you stop being human, Mr. Stemm?”

“Do you want to live forever, Mr. Stemm?”

Edward almost blurted out, “Because I can,” but he stopped himself.

Will he convince the judge? Read the story!

A Severance of Souls, by Drew Avera

I only want to cite a sentence of Drew Avera’s story:

She only wanted him to stay and live a normal life with her. Instead, he had been egoistical and selfish, wanting to make history and expand science at any cost.

Whenever I read or hear “normal life,” I cringe. Most people think that everything that is normal is evidently good. And a normal life is all you can wish for. I feel differently. I guess that is one reason I am fascinated by transhumanism. By any means, a transhuman life would be anything but normal.

The story from D.K. Cassidy certainly belongs in an anthology about immortality. Many people believe that immortality (or longevity for that matter) would do more bad than good. What would scientists do in a society that has achieved immortality? They would search for a “mortality serum,” of course. Funny isn’t it?

To save Cassidy’s honor, the real reason scientists are searching for such a macabre cure is that immortality made humanity infertile. I’ve often thought about this topic.

I mean, if everyone is immortal, new births are problematic to say the least, because overpopulation appears to be unavoidable. In Cassidy’s story, Mother Nature automatically took care of the problem and scientists don’t understand why.

Of course, for many people a life without births, without children, is unthinkable. But it appears that somehow, birth, life, and death belong together. So, no more death would mean no more birth. I would even go a step further – no more death would mean no more life. Once you are immortal, you are no longer alive in the original sense of the word. I could live with that.

I guess Cassidy feels differently. I also like this part:

In response to pressure from the public, a new suicide industry quietly arose, catering to people who wanted to experience a beautiful death‌ – ‌or whose families wanted them to. These entrepreneurs advertised one-way vacations to nirvana.

Suicide industry? How I wish we were already there. 😉

I didn’t cover all the stories in this anthology. I recommend reading it. I certainly enjoyed it.