Michael Pietroforte February 10, 2018January 7, 2023 mind uploading, transhumanism 5
In the video at the end of the text, Ray Kurzweil discusses the idea of connecting our brains to the cloud. He avoids the term consciousness, although I think he really believes this "neocortex in the cloud" will then somehow extend the consciousness of the biological brain. The headline at the beginning “what will happen when our consciousness is uploaded to the cloud” seems to imply this. I believe this idea is based on a misunderstanding about what computation and consciousness are.

Nobody really knows right now how the brain creates consciousness. However, I surmise it is just a physical system property of the brain. (I admit I am not yet sure how to deal with David Chalmers’ hard problems, but I feel that there is also something profoundly wrong with his argument.) If it is true that consciousness is a physical property like anything else in the universe, what will happen after uploading our consciousness to the cloud? The answer is: It will become unconscious. 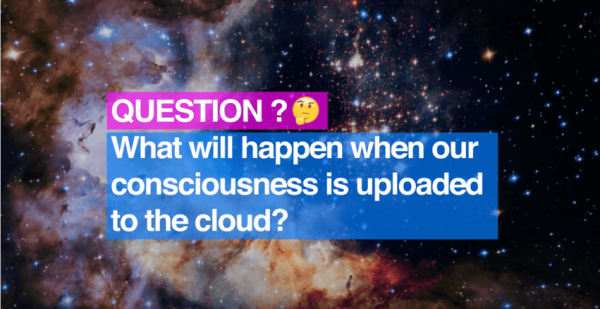 What will happen when our consciousness is uploaded to the cloud?

Mind uploading usually refers to the idea that you can scan an entire brain, and then upload this information to a computer that processes this data in a “virtual brain.” The virtual brain is a computer program that captures the essential processes of a physical brain in algorithms.

I believe the major flaw of this idea is that it confuses the computational representation with the object that is represented. To understand the argument, consider the following analogy.

Let’s first “upload” a weather system instead of a neocortex on a computer. Meteorologists do this all the time. They collect data about weather systems, upload this data to the cloud and then try to predict the weather with the help of their computational models. This means a “virtual weather system” runs on the computer.

Obviously in a weather simulation, nobody will get wet when it rains in the simulation because wetness is a physical system property. That is, this physical property does not really exist in the computer after you upload the weather system. Only a computational representation of wetness (or water) exists in the simulation.

This means if you collect all available information about a weather system (where it currently rains) and then upload all of this information to the cloud, all the real wetness will disappear and will be replaced with virtual wetness. “Virtual” actually means physically not existing. Everything inside the computer will be perfectly dry. Hence, when you upload a brain to the cloud, everything will be perfectly unconscious.

For some reason, people easily accept the difference between a computational model of a physical system and the physical system itself. However, when it comes to psychological properties such as consciousness, they somehow lose this distinction.

Perhaps the reason is that most people in the singularity camp who believe in mind uploading are dualists. That is, they believe consciousness is something that exists independently of a (real) physical brain. They thus replace Descartes’ res cogitans with res computans, also known as software. The brain becomes wetware that runs the mind. Descartes’ res cogitans runs in a very similar way the res extensa (the matter of the brain). (I am aware that someone who believes in mind uploading does not necessarily have to be a substance dualist, but I don’t need to go into philosophical details here because my argument does not depend on the distinction of the various forms of dualism. I just added this paragraph to show that supporters of the computational theory of the mind reason in a similar way as other dualists.)

Just like a soul can be transferred from the brain to any other system (to another body in some faiths), you can transfer res computans from the brain to the cloud. I suppose Descartes as a mathematician would have loved the idea that res cogitans is nothing other than mathematical calculations, also called computations.

This is the computational theory of mind which looses more and more supporters. One reason is that symbolic AI (GOFAI) has totally failed to deliver and cognitive science that is based on this philosophy hasn’t made any significant progress in the last few decades. The more we learn about the brain, the more it becomes clear that there simply is no level of description where the brain looks like a Turing machine. The brain is an insanely complex neural network and neural networks don’t execute computer programs although you can, of course, simulate neural networks in computers. To explain how the brain works, we don’t need this old dualist theory of the mind that distinguishes between software and hardware. This means that if the mind is not software, then you can’t upload it to a computer.

However, I do believe that Kurzweil is correct when he says that we will connect our brains to computers to get a more direct access to the information in the cloud. I just don’t think that this will upload our consciousness to the cloud.