Life extension survey: 42.3 percent – guess what this number stands for!

The exact numbers of the survey are more or less irrelevant because you always get different results depending on how you ask. For instance, if you replace “youthfulness” with “health,” you certainly get completely different results. And of course, the results depend very much on the kind of people you ask (country, social status, religious attitudes, etc.). A thousand individuals is by no means statistically significant for such a survey. Heck, the results even depend on whether the sun shines on the day of the survey or not. In the recent US elections, we saw how helpful such surveys (with much larger numbers of participants) are in making reliable predictions.

I also think that you don’t need a PhD in psychology to guess the general tendency people might have in such a survey. Of course, people would like to live longer if you can guarantee them youthfulness.

Actually, only one number is remarkable in this survey: 42.3%. If you are a transhumanist, you can guess what this number stands for. Don’t search the pages I linked to. The writers of those articles didn’t find the number important enough to mention it explicitly. I calculated it. After I got the result, I was so depressed that I wanted to die right away. 😉 Got it now? If you guessed right, post a comment below.

It is hard to believe, but it is true. Not even half the people want to live indefinitely if you guarantee them mental and physical youthfulness. Actually, I think this number is very high. In my personal experience, the percentage can even be much lower in some countries (I travel a lot). And I am not even sure if you would get more than 50% if you were to ask the question in a congress of gerontologists.

Isn’t this depressing? Why is everyone so eager to die? One of my favorite sentences in Josh Mitteldorf’s and Dorion Sagan’s book (Cracking the Aging Code) that I recently reviewed (also read Josh’s comments on my review) is this (Kindle loc. 47):

But what the doctors do not yet realize is that they are working with a suicidal patient.

This sentence falls near the beginning of the book where the authors discuss the futile struggle of doctors who are to trying to fight the three main effects of aging (cardiovascular disease, cancer, and Alzheimer’s).

With “suicidal,” the authors don’t imply that their patients don’t want be cured of cancer and want to die ASAP. This sentence merely refers to the authors’ opinion that the process of aging is programmed in our genes.

However, I suspect that the literal meaning of the sentence is very close to the truth. I think that it is highly probable that not only our cells are programmed to die. I also believe that the majority of people have a strong death drive. I am not really fan of Sigmund Freud. However, the only way I can explain the results of such surveys is that the suicidal program in our genes somehow affects our thinking. 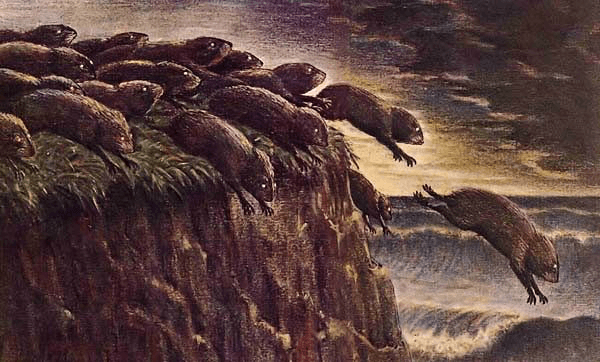 I mean, if, as Mitteldorf impressively shows, dying of old age is biologically beneficial in an evolutionary context, why shouldn’t we have a built-in death drive? Our genes encode other drives that are beneficial for our evolutionary obligations, most prominently the sex drive. So why not also a death drive?

In other words, yes, I really do believe that the majority of people are suicidal. If we lived in a rational world, politicians in all countries around the planet would now be alarmed and would start gigantic programs to finance therapies to help these 57.7% suicidal patients.

Unfortunately, we don’t live in a rational world. We consider aging to be “normal” and dying of old age “normal” too. So all these people are “normal” by definition, and they don’t need any therapy at all. Right?

Why is this irrational, you ask? Well, because we are trying to cure cardiovascular disease, cancer, and Alzheimer’s. These are just other words for aging (and ultimately dying). And this brings me back to the survey. How about asking this question in a survey:

What results would we get? It is hard to predict. If you asked me how many people want to live forever before I started thinking and reading about life extension (about 40 years ago), I wouldn’t even have understood your question.

Josh Mitteldorf was shocked when his father told him that he will die one day. I don’t remember my first feelings when I got the news. However, I do remember how flabbergasted I was when I learned that most people are suicidal.

The first time I encountered this inherited disease was when a friend of mine told me at the age of 15 that he planned to commit suicide when he reached 30. I didn’t really believe that he was serious, so I asked why. Well, he replied, look how these “old” people live. Do you really want to live such a life? Do you want to go to the office every day? Bring the kids to ballet class in the evening and then watch an old movie until you fall asleep? He was serious!

No worries; my friend is still alive. Every 15 years or so, he postpones his suicidal resolution by another 15 years. And I think this is currently the only way how we can help these suicidal patients. It is pointless to ask them what they might want when they are 85. People with a strong death drive just can’t think that far. (Try to rationalize with a teenager who has a strong sex drive at a wild house party, if he or she is aware of the consequences that unprotected sex can have.) All you have to ask the cancer patient is “Do you want the cure or not?” Then we will see if the survival instinct beats the death drive.